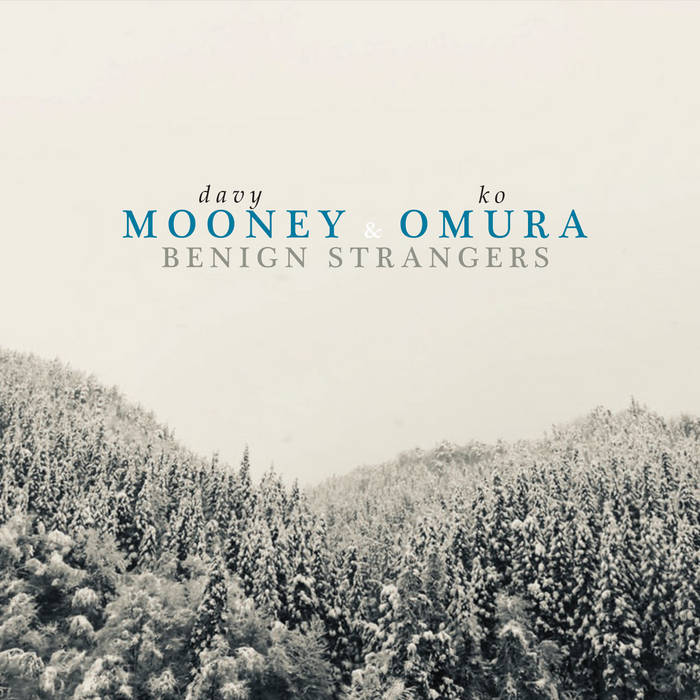 The world is remarkable in that people from far off places and different walks of life can have an immediate, dramatic impact on each other after meeting just once. The notion of meeting a newcomer who embraces new people and ideas but also freely puts forth his own ideas is the theme of guitarist Davy Mooney and drummer Ko Omura’s new recording, Benign Strangers.

Originally from New Orleans, Mooney is a longtime regular on the New York scene and, for the past year, he has been teaching at his alma mater, the University of North Texas in Denton. Mooney’s two Sunnyside releases, Perrier Street and Hope of Home, highlight his fantastic playing and composing with an incredible cast of musicians graced with the New Orleans magic, including saxophonist John Ellis, pianist Jon Cowherd and drummer Brian Blade.

Intrigued by the culture after his first visit in 2008, Mooney has been a regular visitor to Japan. After the 2012 release of Perrier Street, he reached out to a Japan based UNT friend for help getting a tour and ensemble together. It was then that Mooney met Ko Omura.

Omura was born in Tokyo but grew up in the United States and Australia. After graduating from the Sydney Conservatorium of Music and a stint in Sydney, Omura returned to Tokyo where he has made his name as a top-notch drummer and organizer and influencer in the local scene.

Mooney returned to Japan to tour over the next two years. The initial tours mainly featured Mooney’s pieces but a fluid dynamic was enforced as Omura’s influence began to shape the sound of the collaboration by introducing his own music into the touring ensembles. Mooney and Omura’s composing styles are well suited, as they both are melodists of high degree. It wasn’t long before the duo began making plans for further endeavors, including a recording.

During the brutal cold of January 2018, Mooney and Omura met in New York City to record with a small ensemble. It was a warm, reunion-like atmosphere in the studio, as Mooney had long friendships with all involved. But apart from pianist Glenn Zaleski, it was the first time Omura had met the assembled cast, which included John Ellis, bassist Matt Clohesy and engineer Michael Perez-Cisneros.

The recording was a true collaboration with Mooney and Omura both providing compositions, which were finely tuned in the studio. The resulting recording is a stirring collection of original pieces that prove that jazz is a language that spans the globe.

The recording begins with Omura’s sweeping “Benign Strangers,” an homage to individuals, now friends, from all over the globe who have helped him along his musical path. Mooney’s “In This Balance of Time” is a beauty with interesting form and shifting meters, while his “Dim” is an intriguing experiment with the diminished chords. Omura’s “Subconscious Partner” is a breezy tune that shares gratitude to the inner voice that pushes us on our way. Omura has traveled to India to study the tabla over the past four years and his talent on the twin drums is evident on his “Unimagined Virtues,” which is performed in a trio with Mooney and Ellis.

Named for a street sign he sees on his way to work each day, Mooney’s “Shady Shores” is a bright and inspiring piece, which features solos from Zaleski and Mooney. The title for Omura’s quietly stoic “Hiraeth” comes from a Welsh word meaning nostalgia or longing and provides a perfect vehicle for Clohesy’s bass feature. Mooney’s angular “Polly Pulse” is a tricky, polyrhythmic piece and a departure from the guitarist’s usual compositional style. “The Heights” is another from Mooney’s book that shows his talent at writing catchy material in service to improvisation. The recording concludes with Omura’s “29th Road,” a lilting composition named for a street in a Mumbai suburb that had a spiritual feel and the most jovial stray dogs on the planet.

Bright things can happen when worlds collide. Two individuals of diverse backgrounds can come together to create beautiful music, as is the case with Davy Mooney and Ko Omura on their lovely new Benign Strangers.

Bandcamp Daily  your guide to the world of Bandcamp

Featuring Gary Bartz, 5 years of Rhythm Section Intl and an LP of the week by Nicolas Jaar